Evasive octopuses, whom we love 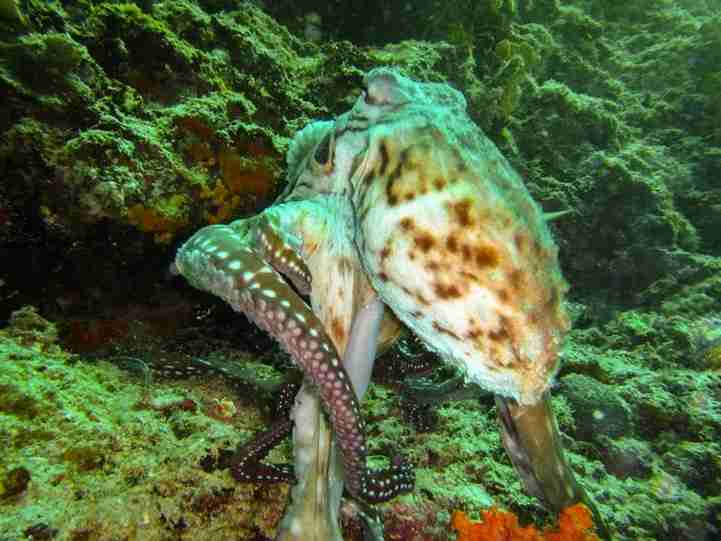 For many years, seeing an octopus during a dive was a dream. Something I hoped would happen each time I went diving. And until very recently, I was left with a dream uncompleted. It was in Dominican Republic that I saw my first and only octopus so far and got the chance to admire it hiding against a rock and upon noticing us watching, swimming away to another hiding place.

Octopuses are absolutely amazing. From changing colors to shapes, camouflaging as another species such as a lion fish, a flounder, a sea snake or a rock… they are masters of disguise. There has been a dozen documentaries, if not more, mentioning how intelligent these animals are. From hunting in association with another species, using coconut or clam shells to hide from predators, octopuses are extremely resourceful. I remember seeing one in an aquarium where the octopus had to open a vial in order to get its meal. It had been trained to understand the problem but it had been a surprising experience to see such a creature using its tentacles to open the vial and show such intelligence.

This was also when I learned that octopuses die soon after mating and that female octopuses will stop feeding to take care of their eggs. Their only goal after laying eggs is to keep them ventilated and protect them from predators. A common octopus has an average life of three to five years and dies a few months after mating.

The mating ritual is also something extremely interesting: out of their eight tentacles, one is modified for the male octopus and called the hectocotylus. It’s stocked with sperm and while some species insert the arm in the oviduct of the female, in other cases the male takes off the arm and gives it to the female. I’m not sure if that system exists in other species but I find it an amusing peculiarity. Reproduction has only been studied on a few species, however, so we do not know much about them. It does not seem that octopus fights for dominance like cuttlefish, and so far few species, such as the giant Pacific octopus, display a courtship behavior by changing color and skin texture.

There are currently over 70 species of octopuses in the world, with most species’ statuses being of ‘least concern’ or not having been assessed due to deficient data based on the International Union for Conservation of Nature (IUCN). They are mollusks and do not have a skeleton. Octopuses, like every other mollusk, lack hemoglobin but rely on hemocyanin to transport oxygen, which shows by them having blue blood. However, they are the only mollusks which are bilaterally symmetric.

Thanks to their lack of skeleton, octopuses are able to squeeze into the tiniest cracks and hunt for crabs or fishes. While this ability allows them to hide from most predators, octopuses are still threatened by other fish that are also adapted to living inside the cracks of the rocks, such as congers and moray eels. One of their way of protecting themselves is through the projection of ink, allowing them to temporarily blind their predators and flee. In case one of their arms get eaten, it can regrow – just like the tail of a lizard!

Octopus can swim as fast as 40 km per hour or almost 25 miles per hour even if most of the time they slither across the seabed. The underside of their tentacles is covered in suckers, with about 240 suckers per tentacle for a common octopus. Their suckers aren’t just for them to cling to something; they can be used to lift heavy objects, with one large single sucker being able to hold up to 13 kg or 35 lbs! As a comparison, an average human can lift about 30 kg or 70 lbs with one hand. The octopus’ suckers can move individually and are also a way for the octopus to feel their environment, whether by touch or by picking up chemical signals.

I think that the most amazing feature of an octopus is its ability to change both color and skin texture. To witness it first hand is plain hypnotic. One second there’s nothing but a coral in front of you and the next the octopus looks all smooth and clear colored instead of where the corral was at – it’s almost like seeing a new creature. That’s not something you see every day. It’s like we struggle to comprehend it when we see it; or at least that’s how it felt like for me. After all, most animals we encounter don’t have that ability. And even if anoles and chameleons also have the ability to change color, they aren’t able to also change shape – that’s also quite something to see. An octopus with its tentacles spread around it and the one all curled up against a rock clearly don’t take up the same space and seeing it unfurl right before you is amazing.

Cuttlefish and squids also have the ability to change color and I’m hoping I’ll get the chance to see that for myself. Experiencing it once only made me want to encounter an octopus again – to see their camouflage, to see their special way of moving across the seabed before suddenly taking off and swimming away.

I find octopus fascinating and, considering how intelligent they are, I wonder if they have the ability of self-recognition. Currently, nine species have passed the mirror test, with two of them being marine animals: bottlenose dolphins and orca whales. And the manta rays are also promising candidates as they showed great interest in  their reflection and didn’t try to socially interact with it. However, the last part of the test that involves using marks on the animal and studying its reaction to it has not yet been done. Who knows? Maybe octopus will be the next animal to join the list …

Written for 7SEAS blog by Aliénor Stahl
Aliénor is currently completing her Master 2 in France on the biology of ecosystems.
She is passionate about marine biology and started diving when she was 12 years old.