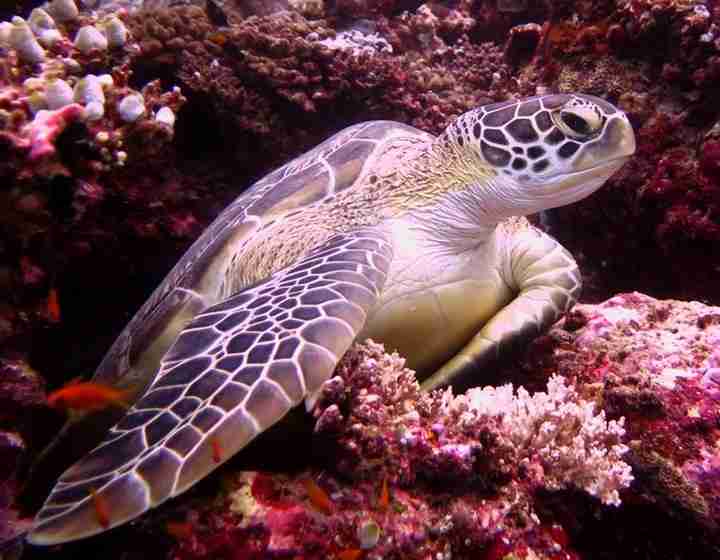 The first time I encountered a turtle, it was nearby Akumal, in Mexico. This beach is well-known due to green turtles coming there each year to lay eggs but also because the turtles stay in the lagoon, making it an easily accessible spot to see turtles. Just a few meters away from the shore and one can see the turtles peacefully grazing the algae, paying little to no attention to the curious snorkelers.

My favorite moment? Seeing them gracefully swim up to the surface to breathe and then swim back to the bottom – it’s like watching them fly, calm and unhurried.

Green turtles travel over 2 000 km between their feeding grounds and the place where they lay eggs, making it the longest migration journey among the different turtle species. It takes them days, if not months, to get there and I got the chance to be at the same place at the right time and be able to see them.

Diving with turtles is a delight of all time. Seeing them free, in the ocean, and going on with their life, whether by feeding or trying to get away from curious divers, makes me feel amazed by how life adapted to survive. It’s such a wonderful feeling to know that they can go anywhere they want. However, it’s important to be aware of how fragile those turtles are. Indeed, among the seven species of turtles existing, three are ‘vulnerable’, one is ‘endangered’, two are ‘critically endangered’ and the last species’ status has not been assessed due to deficient data based on the International Union for Conservation of Nature (IUCN).

The main threat to turtles? Humans. Be it because of poaching in some parts of the world, of the turtles eating plastic bags or straws they mistakenly considered as food, as well as the turtles getting tangled in fishing nets… their populations are dwindling.

Turtles have proved themselves to be resilient: the origin of sea turtles can be traced back to the Late Jurassic, about 150 million years ago, while the oldest relative to existent sea turtles is from the Cretaceous, around 120 million years ago. Isn’t it amazing to think that turtles and crocodiles are probably the closest thing to a dinosaur that we’ll ever see?

I remember the first time I truly saw a turtle during a dive. It was in Mexico once again and the turtle swam straight toward us – I couldn’t believe my eyes. Even years later, seeing a turtle during a dive gives me that little shock, that spark of excitement. But that first time? It was unforgettable. We turned around to follow it, struggling to keep up with its speed to be able to snap a few pictures. I’m not sure how fast a diver is able to swim but a green turtle can reach up to 35 km per hour, which is faster than an average human running, or about the speed of the fastest professional football man. Underwater, we are no match to them, not when they want to get away from us. But it only makes the moment more precious because you’re aware of how little time you might have to admire it. Pictures can’t describe their grace, their beauty. Even a video cannot quite capture it.

Females return to land every two to four years to nest, with each clutch containing between 50 to 350 eggs and the females being able to lay up to eight clutches. From there on, the eggs incubate for fifty to sixty days before hatching. Most eggs of a same nest will hatch at the same time, resulting in numerous baby turtles crawling out of the sand and toward the sea – a unique moment in life. Out of a thousand eggs, only one or two turtles will grow to maturity and become able to reproduce and continue the cycle.

I got the luck to see a hatching once, in broad daylight even though most species of sea turtles hatch at night to give the hatchling a better chance at survival. Luckily for those babies I saw, an association was on the location, keeping an eye on the nesting sites in order to prevent predation on the eggs but also to rescue turtles in need or, in this case, gather the baby turtles to keep them until nightfall and release them at a better time.

In the recent years, I’ve become more and more aware of how endangered our marine fauna is. But every now and then, good news appears. A recently cleaned up beach of Mumbai witnessed the first hatchlings of sea turtles in decades. People observed a hatching on the Mediterranean coast in France for the first time ever.

I believe that turtles are one of the most emblematic animals of the oceans. There are still many things we don’t know about them, about their life. We still have things to discover and I hope to have that chance in the future.

To study turtles and do everything I can to protect them. I want people to be able to see them with their own eyes, to experience what I experienced. To wonder why the diving instructor is pointing at a rock before realizing that it’s not a rock but a sleeping turtle. To witness said turtle looking at you and peacefully start swimming around. It’s a unique experience, one that is repeated with each encounter with a new turtle and that is never the same. Diving is an open door to another world and turtles, by nesting on lands, are the ambassadors of the oceans by coming on the shore and showing us what we have the opportunity to see if we go visit them.

Written for 7SEAS blog by Aliénor Stahl
Aliénor is currently completing her Master 2 in France on the biology of ecosystems.
She is passionate about marine biology and started diving when she was 12 years old.